For our final excursion whilst in Iceland, we attempted to watch the aurora borealis – perhaps better known as “the northern lights”. Arguably one of the most impressive natural wonders of the world. However, they are also one of the most unpredictable phenomena’s. Though there are nightly aurora forecasts, despite a high prediction, you may not even see a whisper of light activity. A few nights prior to our trip we checked the forecast, reassuringly it said there was a high chance of the northern lights making an appearance for us. Even so, it was still not a guarantee we wouldn’t waste an entire evening sat in darkness on a coach.

Unlike our whale watching and blue lagoon departures, this one was surprisingly smooth… We were actually remembered this time on the pickup route, and we set off relatively on time. After a few days in Iceland, I don’t think time here is definitive or something strictly followed. Instead, it’s a rough guideline. A time to “aim” for. If it’s not met then no worries, it’ll just happen a bit later than estimated…

We booked the “basis” northern lights tour, as opposed to the luxury pass available (obviously for double the price of our standard tickets). As we boarded our coach for the night, the “luxury carriage” was positioned right beside us. Already, there were a few noticeable differences from our trip in comparison to the big spenders all but 10 meters away.

Honestly, I didn’t really see a point in paying nearly €100 to merely drive around in a slightly better coach. At the end of the day, going for the lavish option does not increase your chances of catching a sight of the northern lights.

As we departed we had a lovely tour guide who was giving us the history of Iceland and the northern lights, and it was actually really interesting to listen to some of the historic beliefs surrounding the aurora borealis. For hundreds of years, different cultures have had their own beliefs as to what the wonders of the lights are and represent. Icelandic folklore states that the lights are in fact elves dancing through the night sky. These elves are also known as Huldufolk, which roughly translates to “the hidden people”. Though many people no longer believe in this myth, there are still some natives who hold the belief to be true. So much so, that in order to build on land in some areas, the approval of the elves must be sought in order to not disrespect them.

Though the guide didn’t convince me to change my belief regarding the existence of elves, these stories did make me even more excited at the thought of seeing the lights. However, after around 3 hours of driving and a few stops in the cold to try and wait for the lights, I felt our chances were slowly getting slimmer. I’ll be honest, I’d reached the point where I’d almost given up the hope of seeing them. Then around 10:30pm we finally pulled up to a lighthouse, and once again the coach proceeded to pile out into the cold air.

“Look, look. The Aurora Borealis everyone!”

Everyone looked to where the tour guide was excitedly pointing. We couldn’t see a thing apart from the pitch black night sky. Then slowly but surely a tiny silver whisper began to appear in the sky. At first, I was quite disappointed. This was nothing like what I had imagined them to look like, or what the pictures had shown either. But gradually, this tiny silver thread began to develop and slowly turned into a large green mass floating above our heads. It was pretty impressive. The lights gracefully swirled and twirled around forming a large spiral, it was even better than I had initially imagined. 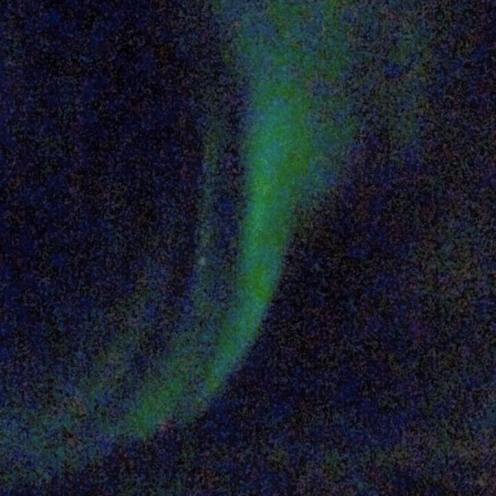 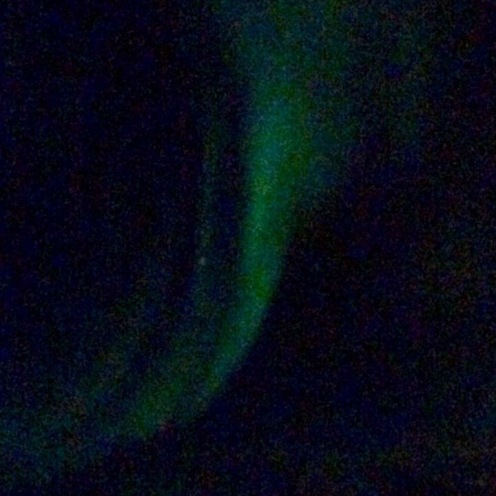 All you could hear was the snapping of camera lenses. But unfortunately, my camera was wasn’t up to scratch to capture an accurate representation of the lights we actually saw in the sky. Despite this I still really like my picture, it reminds me of what was actually ‘dancing’ above my head. We definitely got our “basic” monies worth from our tour, as the elves came out in full force that night. Once the first dance was over we all got back onto the coach to start our journey back to Reykjavik. But on our way, the coach quickly pulled over at the side of the road as the northern lights came out again. This time the lights were even bigger and brighter. It was fab! I never once expected them to be so large. Maybe the elves were feeling generous that night, or perhaps we were just very lucky? Either way, the sights we saw were very impressive, and it was fortunate that they were so large and stayed out for the amount of time they did.

After the second display ended, our coach ride back was pretty uneventful. James and I both conked out asleep on each other’s shoulders for the next 2 hours. Though we were both very lucky to wake up 10 minutes before the coach made the first drop off outside our hotel. It would have been a bit of a mess otherwise!

The northern lights is definitely a once in a lifetime experience, and to get to see them whilst in Iceland was the cherry on top of a fantastic, very late “summer” holiday. Though I wouldn’t have been complaining if we didn’t see them either, as it would’ve just meant that we would have another reason to come back to Iceland. The dancing elves certainly lived up to their name. If only everywhere had some elves to spread their magic…

Pin it for later: