After recovering from our boat trip (read my earlier blog post “How NOT to go whale watching”) we thought a morning spent at the Blue Lagoon would be the perfect way to relax again. The website claims it is “one of the 25 wonders of the world”. Quite a bold statement. So it was safe to say that I was extremely excited at the thought of visiting the famous Lagoon I’d heard so much about. 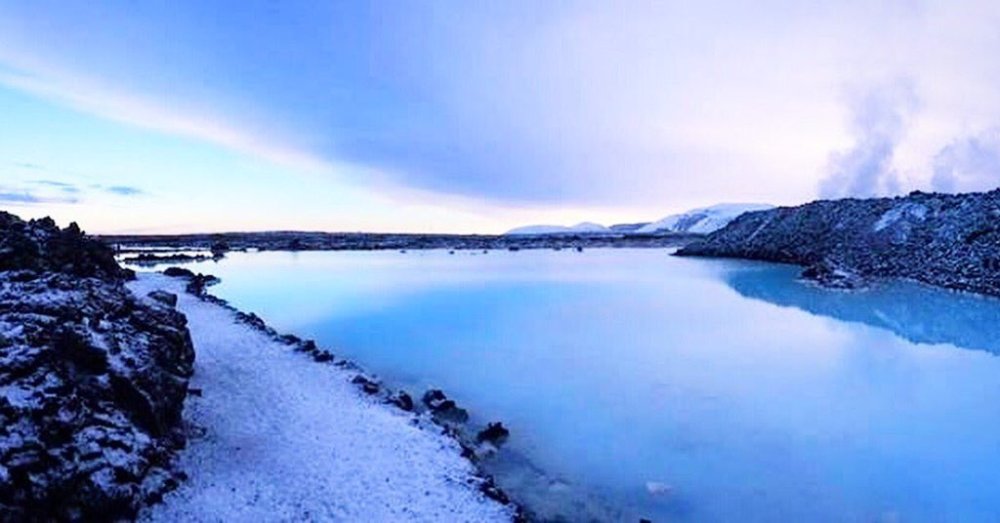 We’d booked morning tickets in hope that it wouldn’t be too busy and we’d miss the mad rush of half-naked tourists scrambling to get out of the frosty chill. In fact, it was so early that the bus company forgot to pick us up in the first place… 20 minutes after sitting in the cold outside our hotel we asked the receptionist to call the company and inquire.

“It turns out they forgot to pick you up. Wait outside again, someone should be there soon.”

Every coach that slowed down slightly or stopped raised our hopes, only for the driver to then put their foot down, or walk straight past us calling for another couple. But not long later our chariot finally pulled in, and my god it was impressive! I have honestly never seen anything like it before. The only way I can think to describe it is as a converted bin lorry that must have had a stint on ‘pimp my ride’. It was definitely distinct as a design concept – one of a kind. But I think the pure obscurity of it made our delayed arrival completely worth it for James. He even took a picture of it to treasure…

Once in the pimped up truck, it took around 40 minutes to get to Grindavik. Once inside waiting by the main reception it felt like we were in a hotel, with suited and booted employees hurrying around us. Although rather than asking if we’d be interested in room service or breakfast, they were offering towels and swimsuits. Everyone got an electronic wrist tag – similar to what I imagine the police tag criminals ankles with… But rather than acting as a tracking device, this tag allowed us to get in and out of the Lagoon. It also doubled as a scanner key to your locker. Though this did cause me a few issues as I couldn’t get mine to lock, whilst somehow managing to continuously unlock another woman’s locker much to her annoyance!

James and I decided to meet in the spa itself once we’d both got changed and dealt with the pre-lagoon shower routine that was required of everyone. We had two options when entering the pool:

Obviously, we went with option 2.

Outside we were greeted with hot temperatures and stunning mountain views – if you close your eyes it feels like you’re in a lovely hot bath within the comfort of your own home. In reality, you were outside, in a bikini, whilst in Iceland, in minus temperatures… Bizarre to say the least. There were (brave) people wandering around the outskirts of the pool in just swimwear, whilst members of staff were patrolling in full winter gear – hats, gloves, scarves, the whole lot!

We swam over to the spa bar and ordered ourselves a couple of fruit smoothies. Money wasn’t an issue in the water though – we simply scanned our wrist tags and voila! We had paid! There were a couple of American tourists (I’m sure they’re not all the same) making a complaint to the staff behind the bar, claiming their drinks were one day out of date. Whilst everyone around watched this scene play out the girls behind the bar checked his drinks sell-by date. Of course, it wasn’t out of date… It was simply the day the smoothie had been made, showing how fresh the drinks actually were. His claim for a refund was quickly rejected as he sunk away in the water whilst being jeered by all his mates.

James and I both took full advantage of the free face masks that were available from around the lagoon, slathering them onto our faces. I don’t think I really felt any of the result/skin benefits it claims to produce if anything I found it was more fun just putting on the mask itself. Luckily (or perhaps not), I managed to capture us both looking out finest in the Lagoon with the help of a trust waterproof disposable camera. Prior to arriving, I knew we were definitely going to visit the Blue Lagoon. I really wanted to take some pictures whilst there, but without having to pay for a new phone/camera at the risk of dropping mine into the water. Buying this cheap camera was one of the best decisions I made. Despite only costing around £8, we captured some fab pictures, even though the quality might not have been that of an iPhone 6… Although you could buy a waterproof bag for your phone at the spa bar they were pricey, and our camera was definitely better!

After around 2 hours soaking in the geothermal pool, our skin resembled that of a prune. Not wanting to risk actually turning into one or (most likely) miss our coach ride back to Reykjavik we decided to head back to the changing rooms. Though somehow I managed to have a slight mishap when finding my way back to the lockers – it’s not as easy as it sounds – honest! Whilst wandering around (each locker room looked identical) I walk through another door and find myself surrounded by fully clothes tourists in the middle of the reception. I start to panic as I realise I’m;

I sprint to the nearest staircase all whilst being shouted my a member of staff for not being in the changing rooms and making a slippery hazard on the floor! Too late… I had already committed myself to run up the stairs at this point. Finally, I found myself back in the ‘correct’ changing room this time. Turns out I’d just gone to the wrong floor initially. Easy mistake I’m sure…

The Lagoon was certainly a morning of relaxation and recovery after the previous day of being stranded out at sea whale watching. Looking back I think the Blue Lagoon probably is one of the 25 wonders of the world. Since there aren’t many places in the world where you can swim in toasty temperatures whilst surrounded by gorgeous views, it no surprise that Iceland continues to draw visitors in!

Pin it for later: